Ernest Gimson was one of the most inspiring and influential designers of his age. His friend, the architect, writer and educationalist, W R Lethaby described his furniture as, ‘one kind of ‘perfect’, that is it was useful and right, pleasantly shaped and finished, good enough but not too good for ordinary use’. 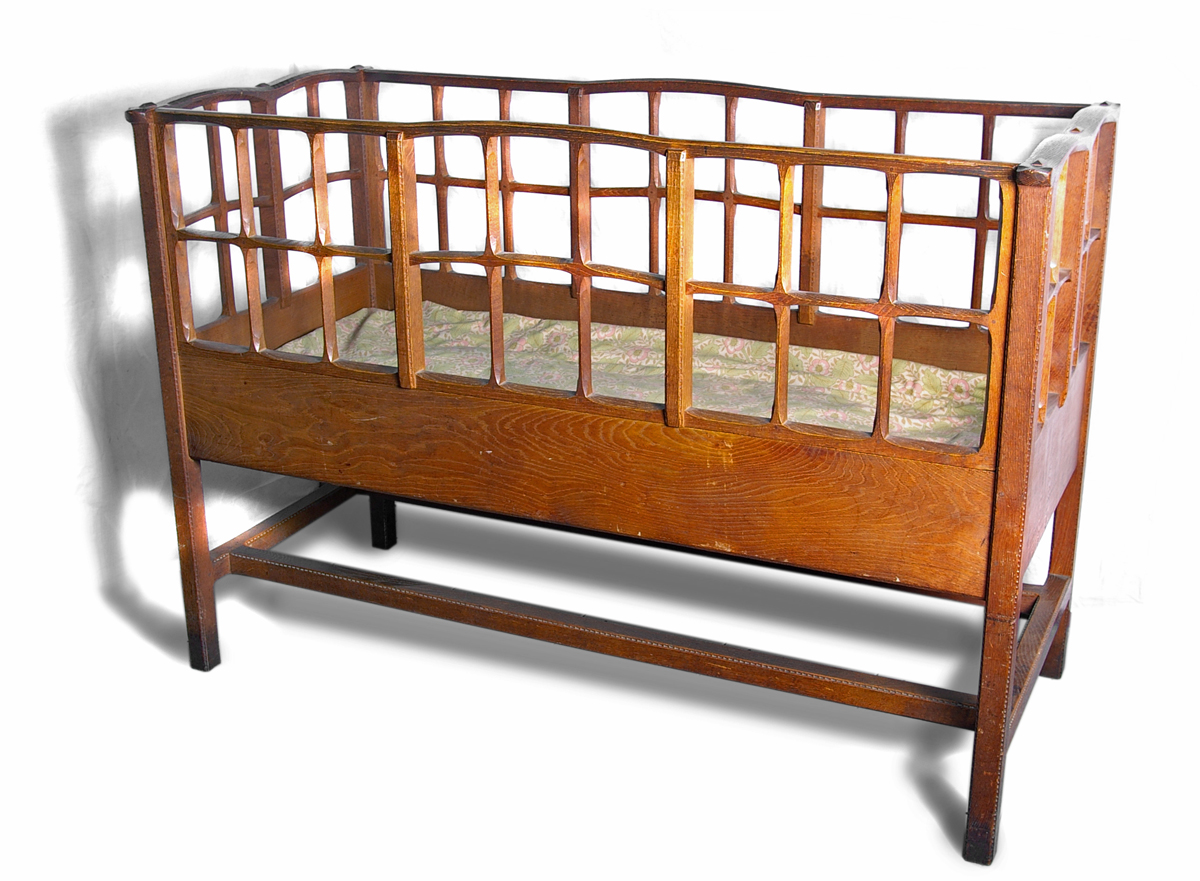 Oak cot designed by Gimson in the Leicester Museum Collection

His approach to design was straightforward – Gimson believed that design was not something added on. It should come out of the careful use of proportion and construction, choice and knowledge of materials, tools and techniques.

He began designing furniture and patterns for embroidery as a young man. While a student at Leicester School of Art in 1885 he was awarded a silver medal in the National Competition for a set of drawings of furniture. These drawings have not survived.  Somewhat surprisingly in view of the award they were described in the National Competition Reports 1885-96 as being, ‘based on an illogical, fantastical, unfruitful and embarrassing style.’

He developed his skill and range as a designer by observing and sketching old work on visits to museums, churches, and country houses in Britain and abroad and by visiting exhibitions and shops to see contemporary work. Shortly after moving to London in March 1886, he described the retail premises of William Morris’s firm, Morris and Company, in Oxford Street, London as, ‘a treasure house for anyone furnishing.’ Gimson attended meetings of the Art Workers’ Guild where talks and discussions on design were a regular occurrence. His closest friends in London – Lethaby, Detmar Blow and the brothers Sidney and Ernest Barnsley – were all passionate about architecture and design.

Working with colleagues, particularly Lethaby in Kenton and Company and the Barnsley brothers in their shared Cotswold workshop, was crucial in developing Gimson’s experience and mature style. The relationship between Sidney Barnsley and Gimson was particularly close and many pieces of furniture made between 1895 and 1902 were collaborative efforts. 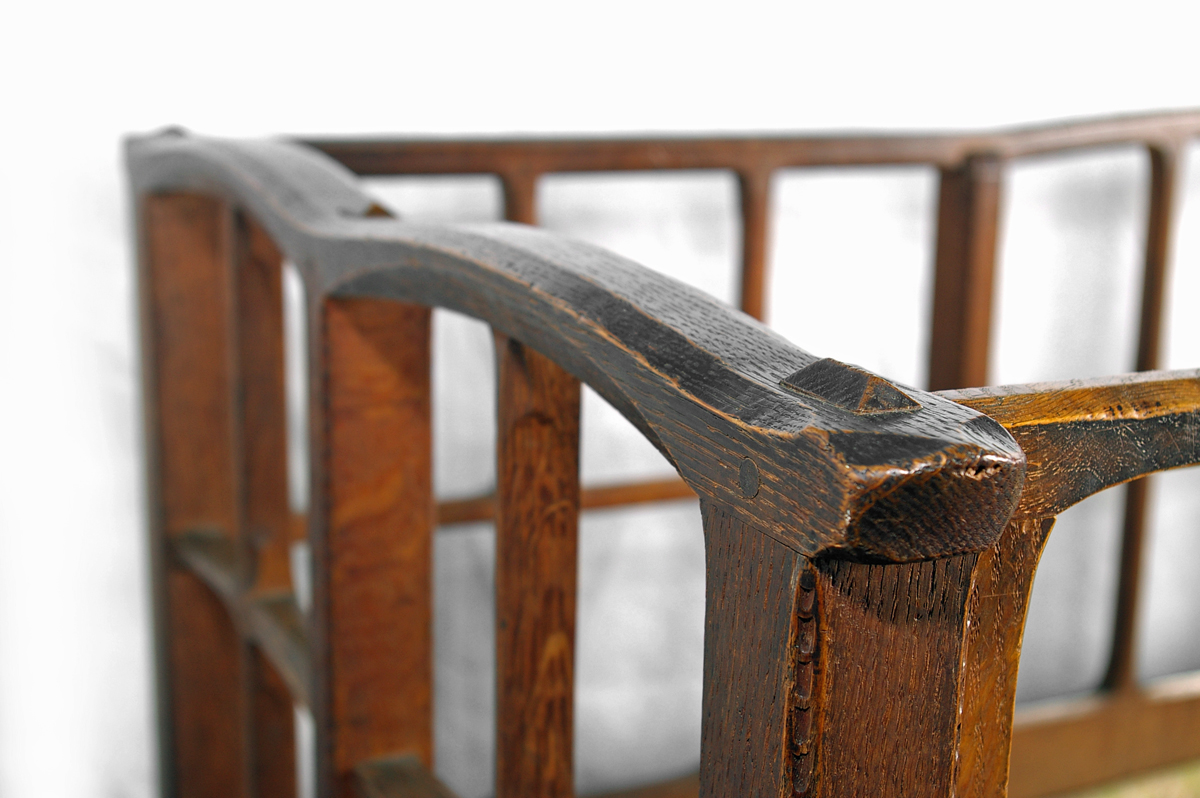 Detail of chamfering on the oak cot designed by Gimson

The furniture received a mixed press. Gimson sent his brother, Sydney Gimson this cutting from a review of the 1903 Arts and Crafts Exhibition in The Cabinet Maker and Art Furnisher:

‘Next comes a dresser or sideboard - I am not sure which - in the butter-tub-and-carpenters’ bench style, that is very similar to the one shown at the last exhibition, only, perhaps, a bit worse.  Here, again, we have the wooden handles, already filthy dirty even by the slight usage they have had by visitors anxious, I suppose, to see if there are any works inside; while the shelves are again supported (!) by what resembles more than anything else a tape-worm in convulsions after a good strong dose of male-fern.  Not that I have ever seen that interesting parasite under such painful circumstances, but one can, in view of so forcible an illustration, imagine what its contortions would be like.  At all events, to say the least, they are not pleasant.’

Gimson scribbled ‘I know you will enjoy this’ in pencil on the back.

An article on ‘Furniture Designers of To-day’ published in Country Life, on 9 May 1908 commented:

'His work is characterised by great finish and refinement. Perhaps its simplicity is rather over-pronounced. The frequent banishment of all semblance of cornice produces a certain attenuation and gives to pieces of furniture, intended as the permanent inmates of rooms of whose decorative schemes they form part, to near a kinship to the packing-case,… But there is great attention to form and proportion, a careful selection of material and painstaking thought over detail.’

However by the 1920s the Cotswold style of furniture developed by Gimson and the Barnsleys was seen as the inspiration for modern design in the twentieth century and it has continued to influence designers and makers up to the present day.

Four elements in Gimson’s designs; western European work (17th and early 18th century), traditional craftsmanship, patterns inspired by nature and Byzantine/Islamic influences were combined with the strong visual sense of proportion and fitness for purpose which characterize his work. 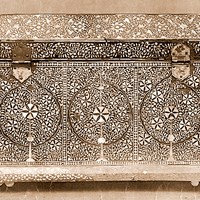 Gimson took great inspiration from nature as many other Arts & Crafts designers but he was also influenced by Byzantine and Islamic art in some of his work.

The English Tradition and Craft Work 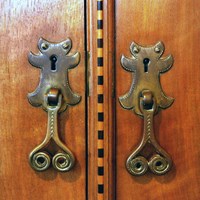 Gimson's designs were rooted in his early enthusiasm for seventeenth and early eighteenth century work.