Sometime in 1890 Gimson spent a few weeks with Philip Clissett, a chairmaker in the village of Bosbury, Herefordshire. 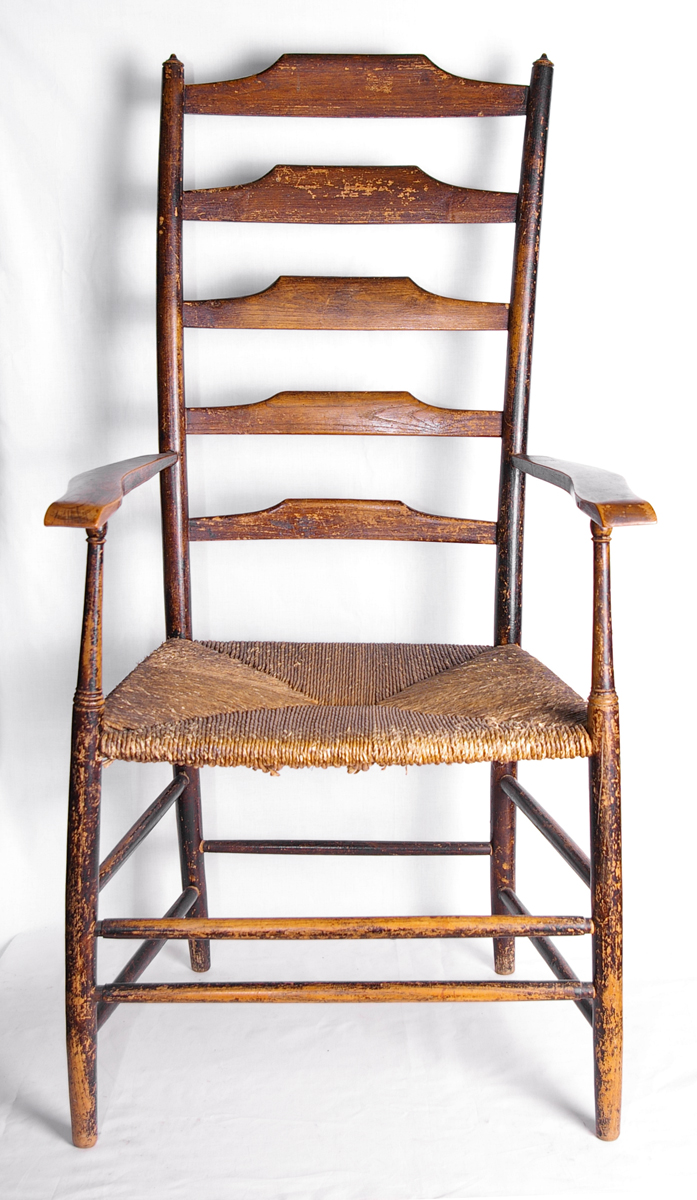 Ladderback chair made by Clissett 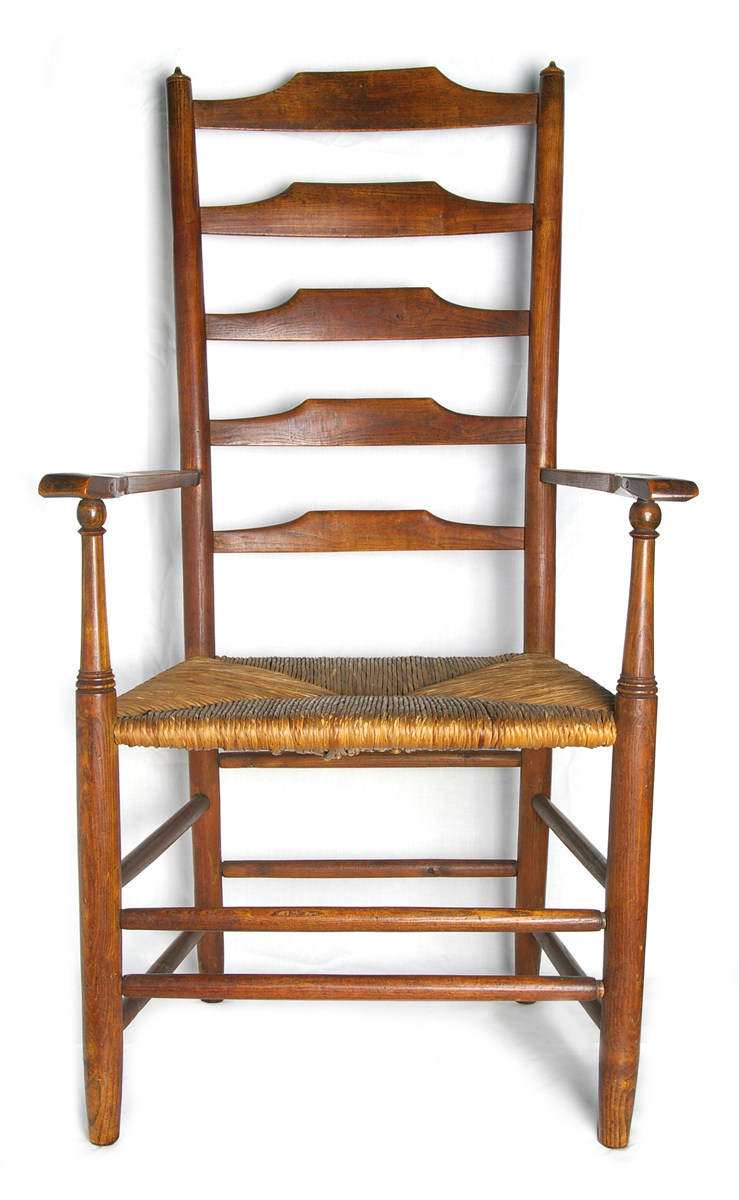 Ladderback chair made by Gardiner 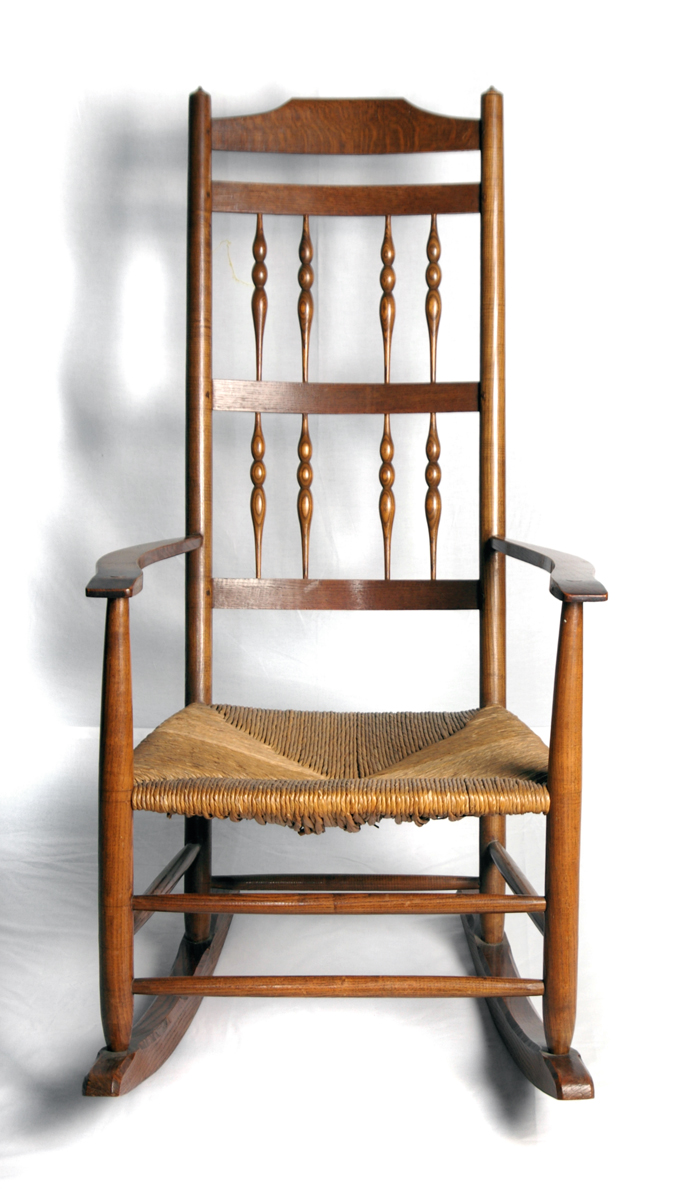 Clissett, who was described by Alfred Powell as resembling, ‘what the old aristocratic poor used to be’, has become synonymous with country chairmaking in the late nineteenth century because of his fortuitous connection with the Arts and Crafts Movement. He was one of a number of makers working in the West Midlands during this period including John Kerry and William Cole. They made chairs using local green wood, mainly ash and elm, for the local market. Their typical wares were low backed chairs with wooden seats. Clissett however was ‘discovered’ by the Arts and Crafts architect, James MacLaren, working nearby in Ledbury in the 1880s. Clissett was commissioned to make ladderback chairs to a traditional design adapted by MacLaren and examples were bought for the meeting hall of the Art Workers’ Guild. In 1906 these chairs were being sold for 8s 6d (about 40p), with the low-backed version selling for 7s 6d. Clissett’s chairs were sold at Heal’s in Tottenham Court Road, London in the early years of the twentieth century.

Gimson would have seen these chairs at Guild meetings and decided learn the basics of the craft. He spent a few weeks with Clissett, making himself a pole lathe and trying his hand at chair making. He also included Clissett’s chairs in the Kenton and Company exhibitions in 1891.

The ladderback chairs that Gimson made himself were understandably more crude than those made by Clissett. They had a straight rather than a curved back and the shaping of the arms was rougher. However Gimson’s chairs which can be seen in the photograph of the workshop at Pinbury were more self-consciously artistic especially in the way that the slats become deeper as they go up the back. Gimson also entered a rush-seated rocking chair in the 1893 Arts and Crafts exhibition illustrated in the November issue of The Cabinet Maker and Art Furnisher. It had five straight slats down the back with two pairs of turned supports between each slat. This exhibit was the best seller in the show that year. 15 chairs were sold at a price of £1 10s each. Gimson went on making chairs himself at Pinbury until about 1902. 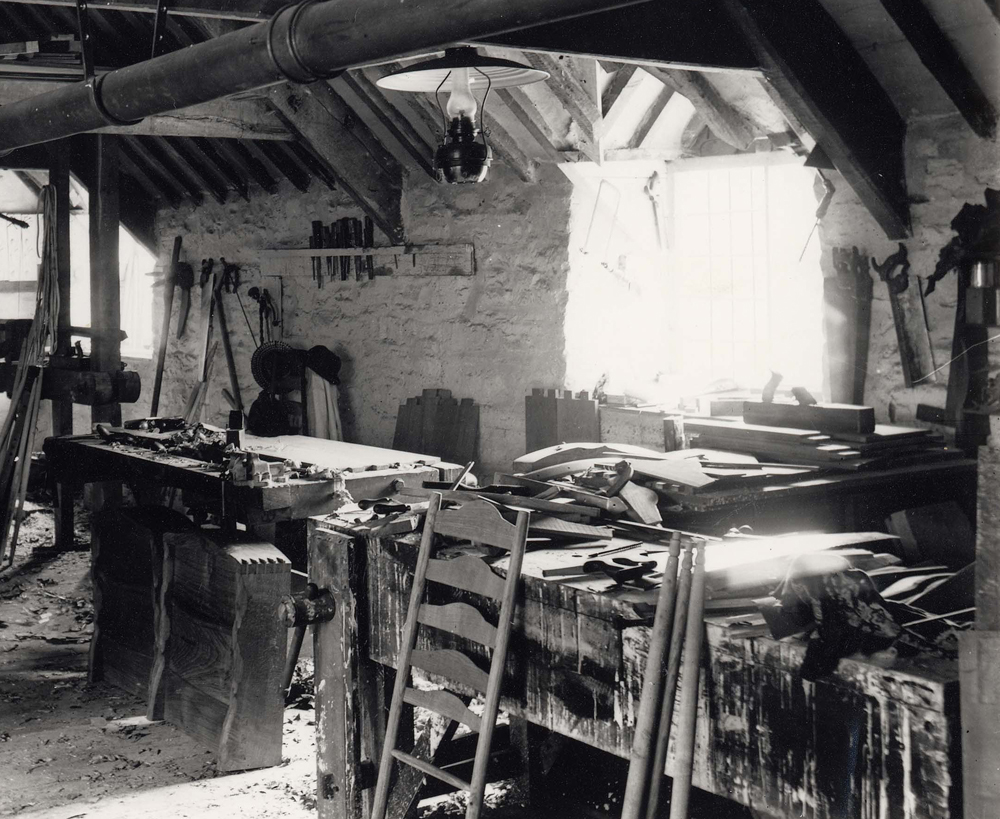 Pinbury workshop showing a parts of a chair made by Gimson 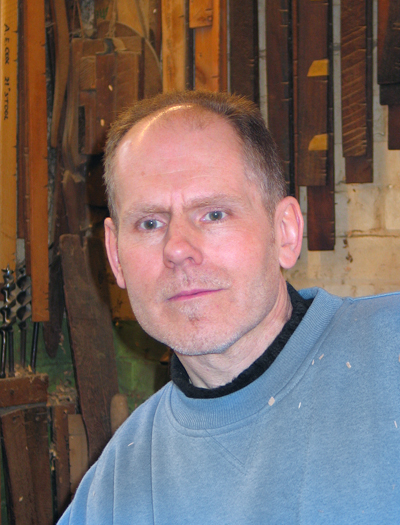 Below is a film of contemporary craftsmen Lawrence Neal making ladderback chairs in exactly the same way Gimson did over 100 years ago. Lawrence was trained by his father who in turn worked with Edward Gardiner, his tools are some of the same ones Gimson worked with. 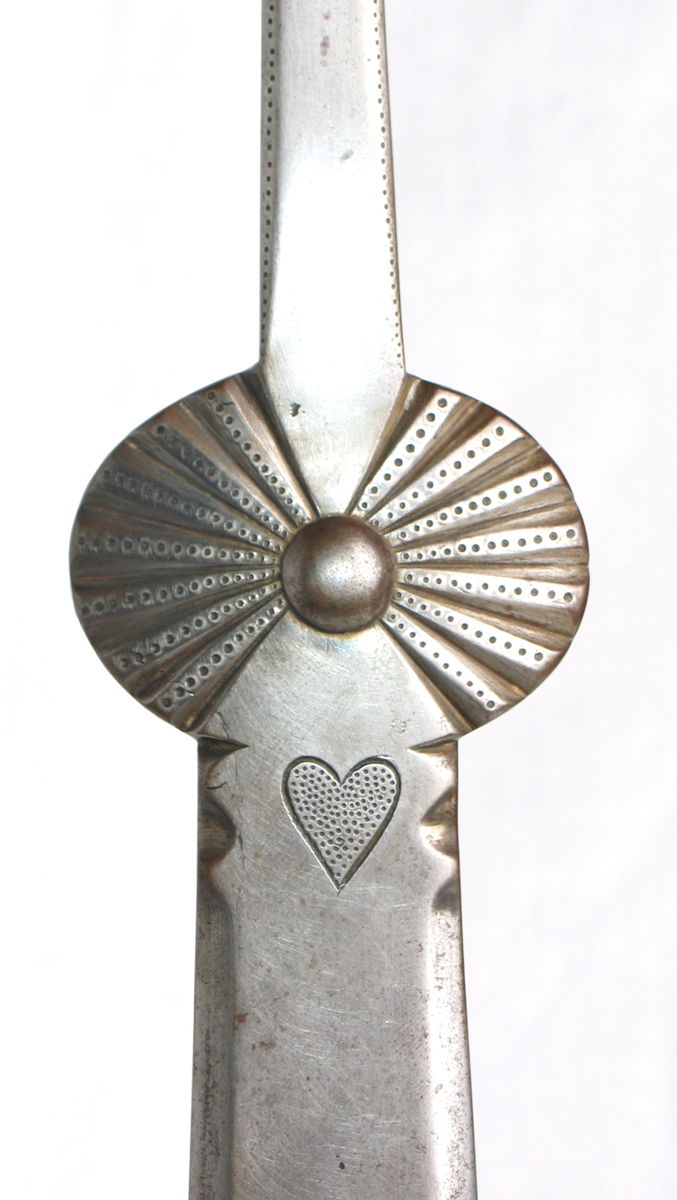 Detail of a firedog showing stamping and chasing techniques 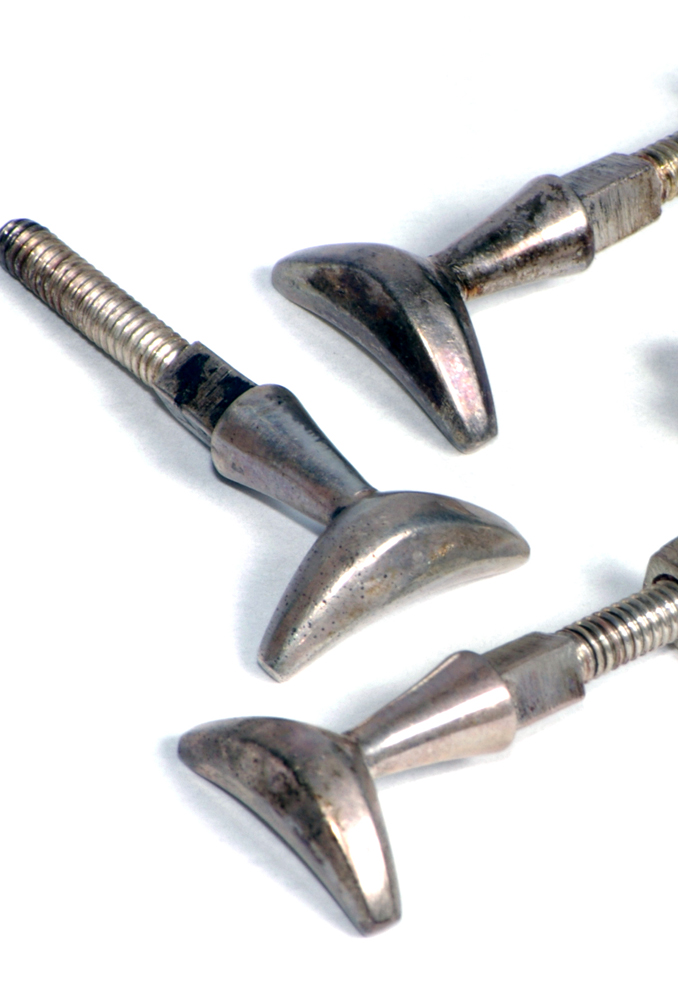 Silver handles designed by Gimson and made by John Paul Cooper

Alfred Powell, the architect and decorator of ceramics, put Gimson in touch with the young blacksmith, Alfred Bucknell. In about 1902 he asked William Bucknell, blacksmith and wood worker in the village of Water Lane, to make some hinges for his house. The Job was done by his son, Alfred. Gimson saw the finished results and was so impressed that he gave him some designs to make up. He set up a smithy in Sapperton itself and employed Alfred Bucknell together with Steven Mustoe, another trained blacksmith. A succession of local apprentices was taken on: Fred Messenger, Fritz Whiting, and Harry Gardiner. Two other names, Poulton and Holmes, appear briefly in Gimson’s job book. They worked mainly in steel, iron, and brass; the occasional silver handles for decorative pieces were made to Gimson’s design by the silversmith and jeweller, John Paul Cooper.

A fire basket designed by Gimson

Ironwork including firedogs, sconces and candlesticks were exhibited at Debenham and Freebody’s in 1907. Gimson wrote to Philip Webb describing the work:

'The fire-dogs were made by the young village smith and were pierced and chased on his anvil. My smiths all think such things rather trivial & are much happier with their forges & hammers – as who wouldn't be!’

In about 1913 the smithy at Sapperton was closed when the village hall was built on the site. Alfred Bucknell continued working for Gimson from Water Lane with Mustoe and later with his son, Norman. Norman Bucknell made fine metalwork to Gimson’s and Norman Jewson’s designs from his workshop in Bisley, Gloucestershire until the 1980s.

A selection of Gimsons metalwork from Leicester's collection can be seen here. 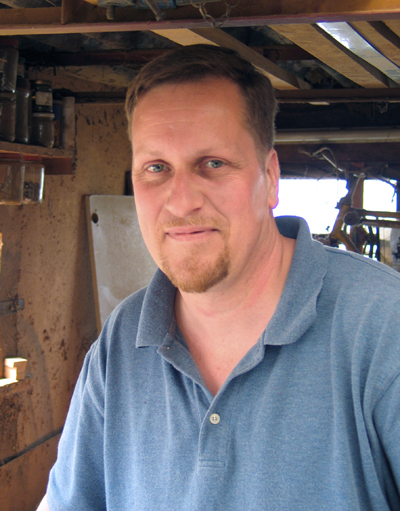 Below is a film of contemporary craftsman Christopher Vickers creating a Gimson inspired brass candle sconce, explained step by step.

Please visit Christopher Vickers website to find out more about his work and to see objects for sale: