Like William Morris Gimson believed in the value of handwork; for society as a whole, for the consumer but above all for the maker. 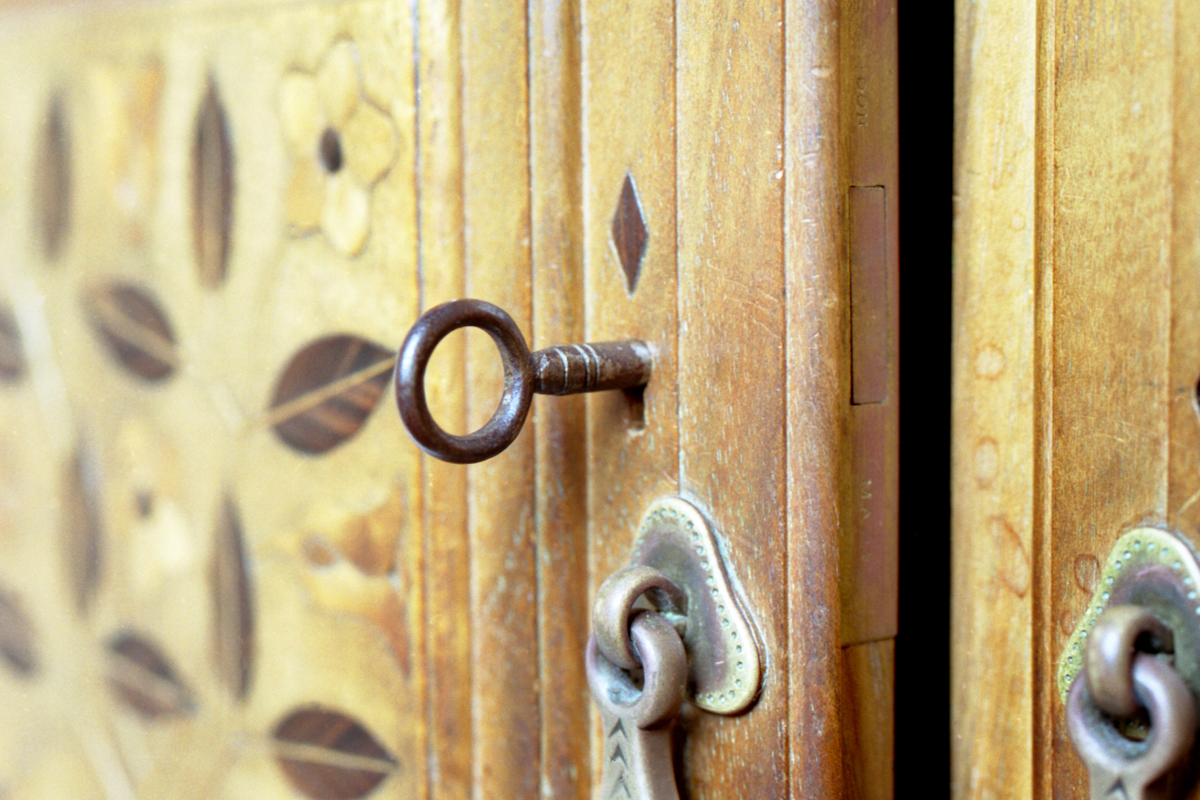 Detail of a handmade cabinet 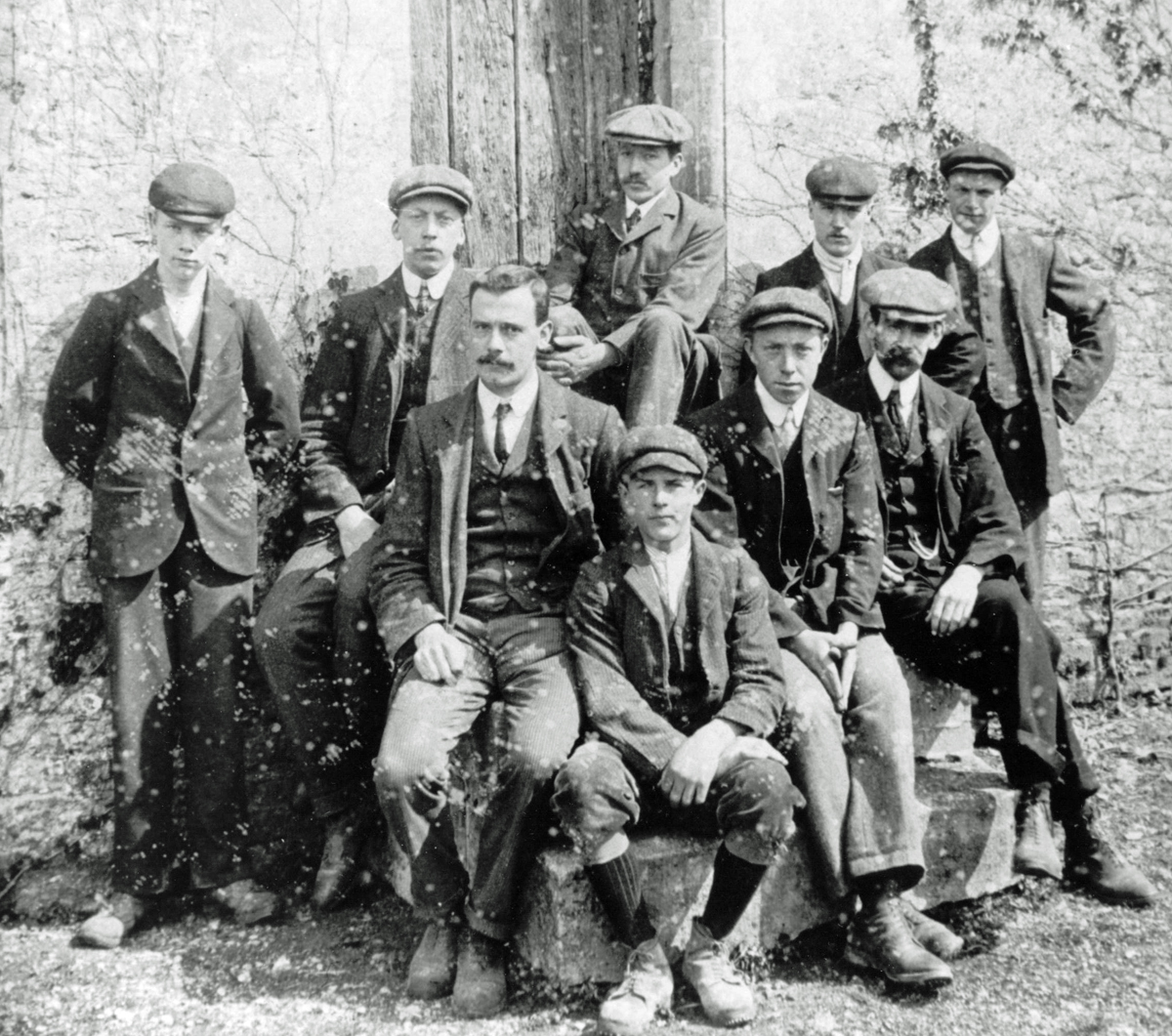 Gimson's craftsmen pose for a photograph

This was a core belief for him and for many of those involved in the Arts and Crafts Movement. He ran craft workshops partly to provide both training and creative, rewarding work for his workforce.

By 1912 many Arts and Crafts designers were depressed by their lack of influence in the marketplace. The movement had not made a significant impact on manufacturing industry. Instead German and Austrian designers had taken inspiration from Britain and developed successful partnerships with industry.

The Design and Industries Association (DIA) was set up in 1916, during the First World War, to reinvigorate British design. One of the protagonists, W R Lethaby, was keen to persuade Gimson, his old friend and former colleague, to become involved in designing furniture that could be produced by others for a mass market.

Gimson was not persuaded. He responded to Lethaby’s arguments in favour of designing for machine production and his letters, copies of which have survived, illustrate his thinking. In March 1916 he wrote:

‘It’s the other side of the D&I – the commercial side that I feel so far away from: It seems to me to be humouring a system that we know to be a wrong one and to be in danger of doing some real injury to the few small beginnings of the one we are hoping for. Its pamphlets rub me all the wrong way – looking on the crafts as unsuccessful and behind the times because they haven’t linked themselves up to industrialism and recognized the inherent possibility of machinery. So much said about distributors and the like and so little about the workmen.’

‘The question seems to be (to go straight at it) who are interested in the crafts? And I should like to find out just where the difference between us comes in – why you think I might do some good by designing bookcases for machines while I don’t. I suppose all designers with workshops of their own have in unprosperous times been faced with the problem of machinery. It has faced me often – sometimes it seems to be a question of machinery or no shop at all and I have wavered about it but always ended by knowing that of the two alternatives I would rather have no shops at all. And I wish you thought this right – from the craftsman’s point of view. If one’s interest in the work were only that of design and utility it would be different but it is in the men themselves too and their ways of work and through that to most other things in life as you know.'

‘I would plan towns and factories. I want to plan them and build them too. I would design railway stations and rebuild the furniture shops in Tottenham Court Road. I want to do it and in my own way so that there need be no conflict with my other work. But as to setting up machine furniture shops I feel differently. It would be for one thing outside my interests and temperament and I should really have to begin by forgetting early aims that have been helpful. For the intelligence and character of furniture makers I want to see more of their work done by their hands and there is no intelligent reason for it not to be. It is only trade habits and mistaken views that stand in the way. And these reasons would also apply to designing for other people’s machines – I couldn’t enjoy it and moreover I couldn’t do it either for I know nothing of the ‘inherent possibilities’ of woodwork machines (I wonder whether Wilberforce recognized the inherent possibilities of slaves). As to the type of machine design that you suggest – thin, hard, precise, that is the kind to make for certainty, but what sort of intelligence would be in its expression? Wouldn’t it be something to chill us to the very marrow of our bones? And so with no end of other work it seems to me that machinery can only dehumanise it and that there it is accursed and the surest way to go under is to employ it! But I can’t call all machinery accursed or anything like at all, only where it is unintelligently applied – railways, we will say, up Snowden, or turners taken from their lathes to poke sticks into holes in machines.’ 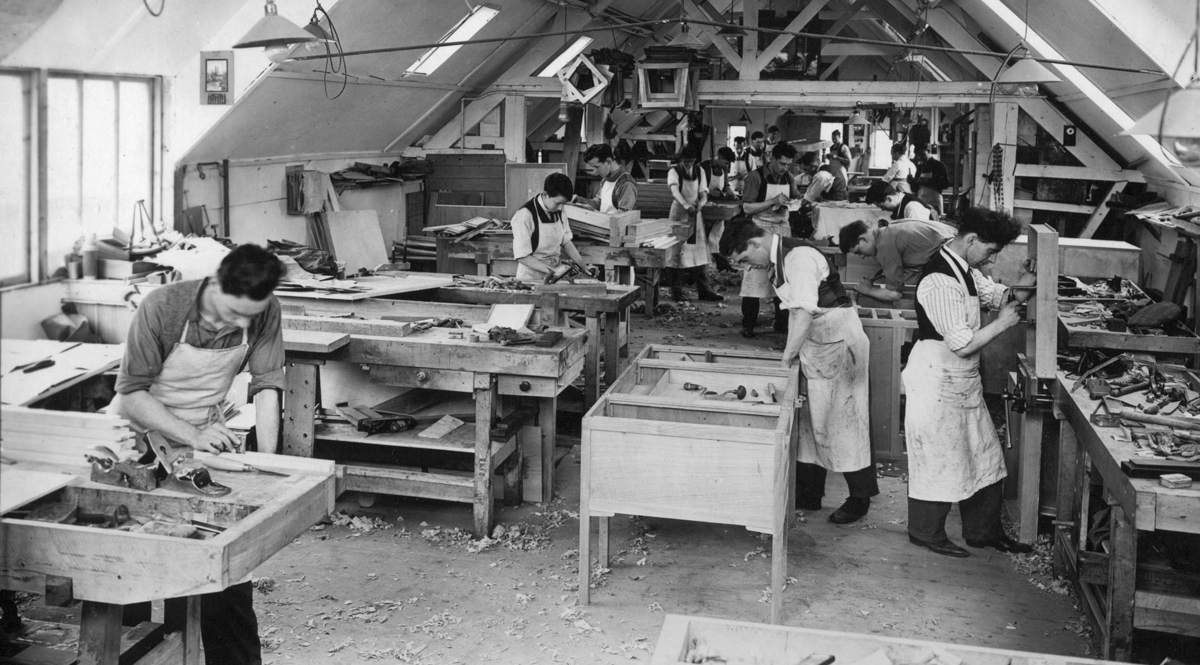 Furniture making at Russell & Sons workshop, Broadway in Worcestershire, about 1926

Gimson felt that artistic and economic arguments – about Britain’s role as a design leader and producer –ignored the human element. Was he running a workshop to produce cheap furniture that might be discarded after a short time or to provide his craftsmen with creative satisfying work? His reasoning came back again and again to the individual worker. In many ways these arguments have continued through the twentieth century and into our own as we face environmental problems, the growth of consumerism and the search for a life/work balance.

Gimson developed plans for a large craft community in the Cotswolds based on architecture and the building crafts. He bought a plot of land neat Sapperton and, early in 1919, was negotiating with Ernest Debenham and others for financial backing but his plans were cut short by his final illness.