Furniture was mainly produced to commission. Gimson never advertised his work or produced a leaflet or a catalogue. 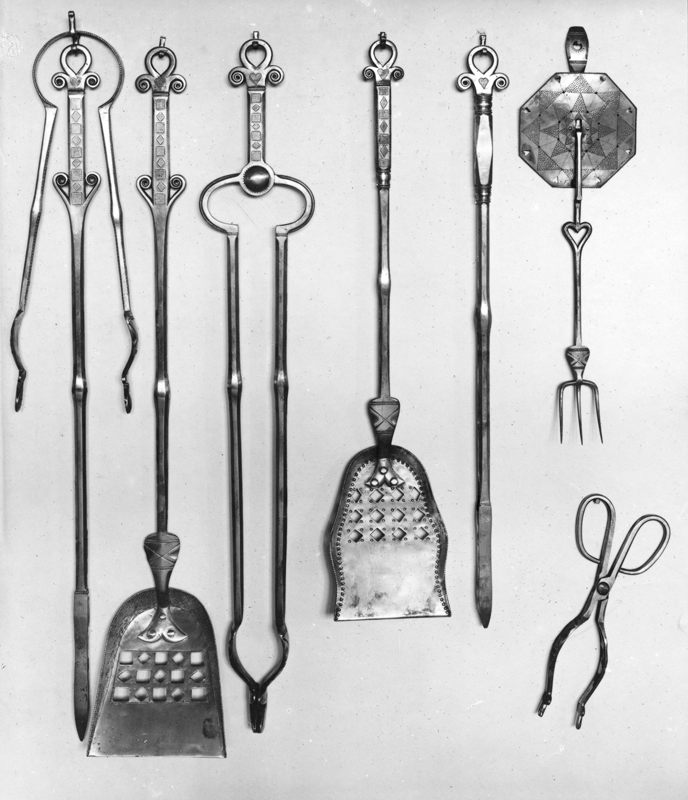 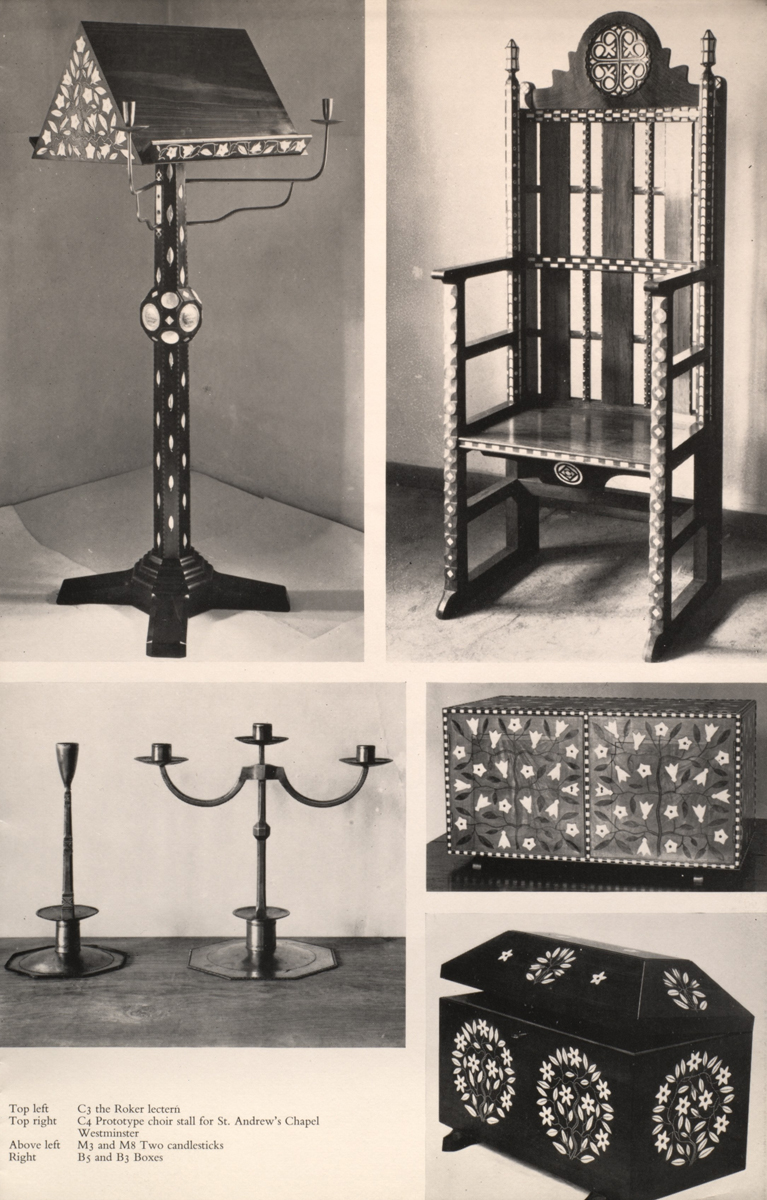 He did ensure that he had good quality photographs taken by Dennis Moss of Cirencester. These were sent out to potential clients, often with Gimson’s own handwritten details including alternative woods and prices and instructions for their return. He also produced sketch designs to show potential clients. According to Edward Gardiner:

‘Mr Gimson always seemed troubled that his designs would be copied, so he never produced an illustrated list, but had all the chairs and settees photographed and these were sent to enquirers with a request that they should be returned.’

The good quality photographs were also useful to illustrate his work in books and magazines.

Patrons and regular clients included those with strong personal connections such as Gimson’s own family and the Bathurst family. Others such as Ernest Debenham were keen supporters of the craft workshop ideal that Gimson was trying to achieve at Daneway. As a young man, Debenham had been involved in Toynbee Hall, the philanthropic university settlement in London’s East End. He went on to open the luxurious department store, Debenham and Freebody’s, in London in 1907 with plaster ceilings and decorative friezes designed by Gimson. He also offered Gimson the opportunity to mount an exhibition of his work in the store at the end of 1907.

Joseph King was another of Gimson’s clients. He was involved with a craft community at Haslemere, Surrey, built up the peasant craft collection there and collaborated with Harry Peach in the development of the Dryad craft collection. The architect, Francis Troup, a friend of Gimson’s since their student days, designed Sandhouse, King’s house at Witley, which was furnished with many examples of Gimson’s work.

Gimson designed a great deal of furniture and fittings for churches so that there was a separate workshop for ecclesiastical projects at Daneway. It was probably separate because of the large scale of much of the work. Commissions came through the Society for the Protection of Ancient Buildings (Salle church, Norfolk and Whaplode church, Lincolnshire) and from other Arts and Crafts architects providing including Edward Prior (Roker church near Sunderland), Robert Weir Schultz (Khartoum Cathedral and St Andrew’s chapel, Westminster Cathedral, London), and Arthur Grove (St John’s, Richmond, London).

Gimson exhibited regularly in the London Arts and Crafts exhibitions and at other shows in Britain and abroad although he wasn’t always convinced of the usefulness of exhibitions for generating sales.

View a PDF containing the list of Gimson's work that was exhibited at the Arts & Crafts Exhibition Society from 1890 - 1916.

A cross designed by Gimson

Setting a price for work is one of the hardest parts of the craft process. Gimson certainly found this difficult. He wrote to his brother Sydney about this problem in February 1903 shortly after the collapse of his partnership with Ernest Barnsley. The store cabinet referred to is now in the collections of the Victoria and Albert Museum.

‘The store cabinet in the Arts & Crafts took 839 hours to make. Yours took 443 hours. The A & C one too is fitted with more expensive wood (very expensive as it cost 2s/6d a foot 1/16 inch thick.) New the gesso panels cost £1 each.  That makes the difference in the two prices. Yours to have paid properly should have been £34. 9. 1½ but we didn’t do our estimating properly you see. Now I have all the responsibility on my sloping shoulders I expect to develop a keener eye for small profits.  By next Christmas we shall see whether I be fool or no.’

The store cabinet was priced at £75 in the catalogue of the 1903 Arts & Crafts Exhibition. It was probably bought by Lord Bathurst as it appears in a photograph illustrating an article on Pinbury Park in Country Life in 1910. The most expensive piece of furniture in the 1903 show was a writing cabinet in ebony and holly designed by C R Ashbee and made by the Guild of Handicraft priced at £85. The exhibition also included an oak sideboard designed by the architect William Curtis Green and made by Arthur Romney Green and D Dillaway for £22.10.0.

Larger manufacturers also exhibited at the Arts & Crafts shows. In 1903 Liberty and Company exhibited an oak inlaid sideboard designed by Leonard Wyburd priced at £60 while Heal’s exhibited the Silver Grain range of bedroom furniture in oak inlaid with pewter and blue wood the wardrobe cost £45. In competition with Heal’s was Harrods Ltd of Brompton Road, London who described themselves as designers and manufacturers of artistic furniture, upholstery and bedding. In 1904 they took the back cover of the magazine Arts and Crafts to advertise their ‘quaint, artistic and interesting’ Glendower bedroom suite in sold fumed oak. This suite, which consisted of a wardrobe, a dressing chest – basically a chest of drawers with a mirror above, a washstand and two rush seated chairs, retailed at £17.17.0. Another manufacturer, Shapland and Petter based in Barnstaple, sold Arts & Crafts style inlaid sideboards for between £13 and £25 in 1906.

A reviewer of Gimson’s exhibition in the London department store, Debenham and Freebody’s in 1907 commented:

‘On the important question of price, our impression is that the simpler oak things are slightly expensive, and that those in more expensive woods very cheap, but in no case are the prices higher than are ordinarily and properly asked for well-made cabinet work.’ 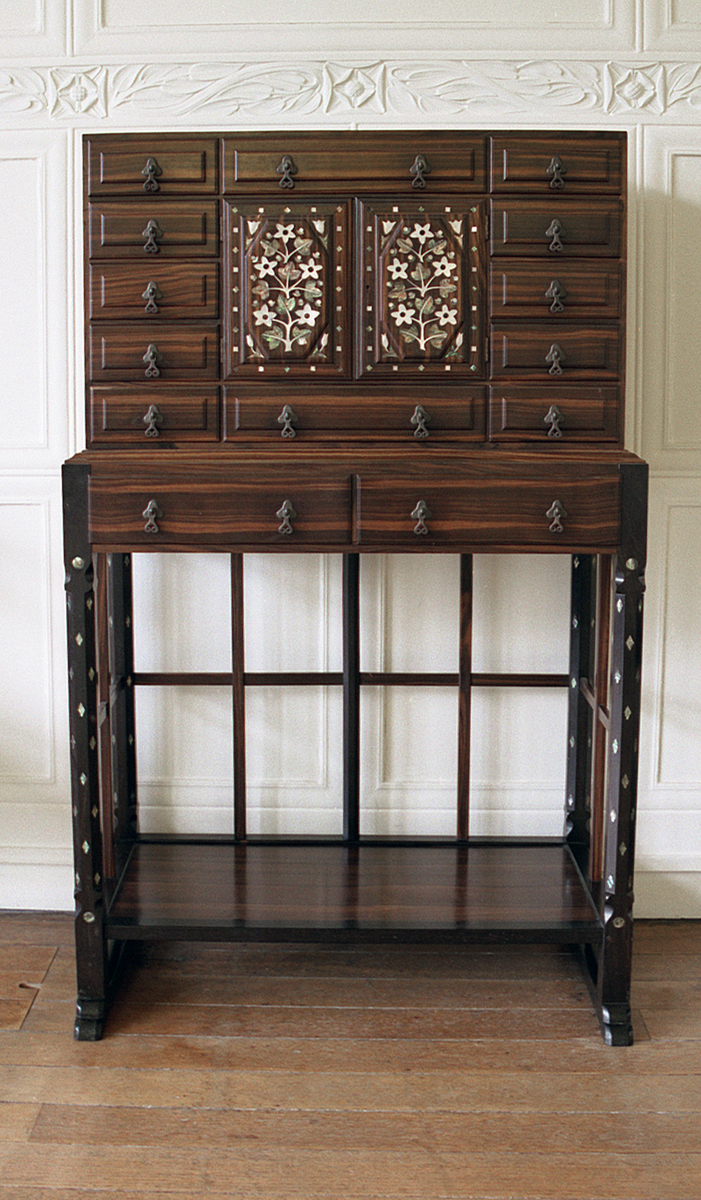 The cabinet numbered 1A.1939 in Leicester's collection 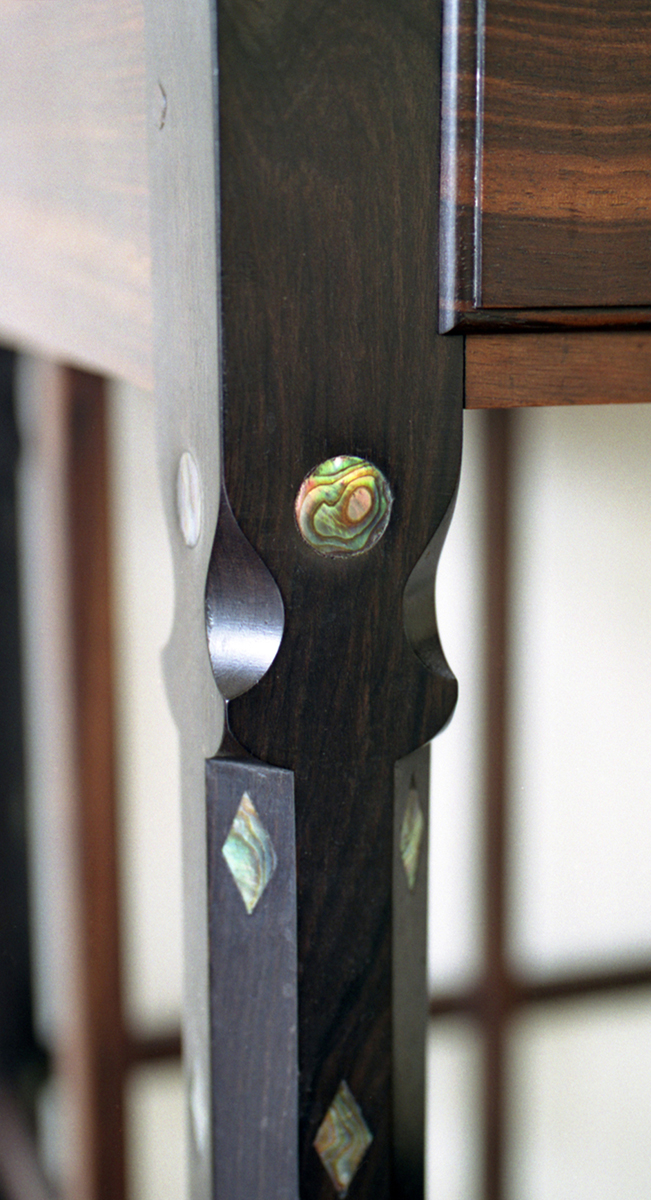 A detail of the inlay on same cabinet

Leicester’s cabinet 1A.1939 was one of the more expensive pieces in this exhibition priced at £45. A set of six walnut chairs was priced at £18 the set. The catalogue also included firedogs priced from £3 15s to £6 a pair.

According to Norman Jewson Gimson had always wanted to be able to produce a simple chest of drawers which could sell for £5 but had never succeeded. The cost of such a piece from the Daneway workshops before the First World War was about £12. The price was dictated by the type of timber used – Gimson liked to use oak but much of the cheapest furniture was made in beech or deal – as well as the design and the finish of the piece. Jewson described Gimson’s dilemma:

‘For the plain oak furniture, intended for cottage use, he would have preferred a less exacting standard of finish, both so that it could be produced at a lower cost and also as being more natural to that kind of furniture. He would also have like a finish more akin to that of the village wheelwrights, who worked more by eye and less by measurement than highly trained cabinet-makers. However unfortunately there was much less demand for the plain oak so he was obliged to more and more to rely on the more expensive type to keep his men employed.’

The entries in Gimson’s one surviving job books show how small his profit margins were. He was taking only between 10 and 15% of the selling price for the upkeep of the workshops and his personal account. Even with his simple lifestyle, it is obvious that he would not have been able to continue his work without a private income.