Ernest William Gimson was born on 21 December 1864 in Leicester, the fourth son of Josiah Gimson and his second wife, Sarah Ansell. 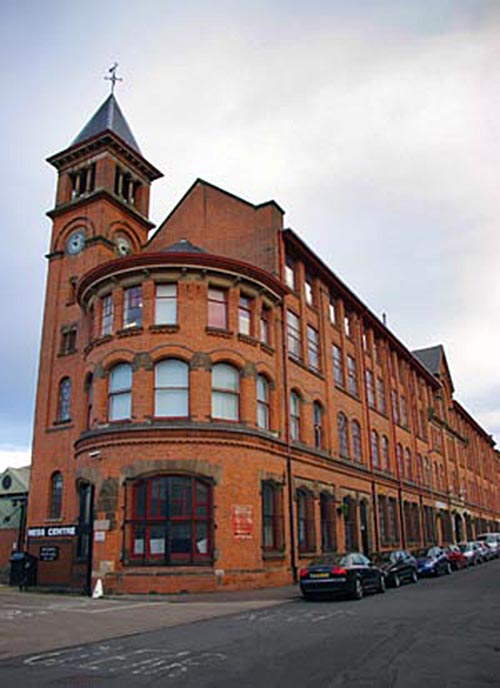 Leicester had expanded dramatically in the nineteenth century from a market town into an industrial city, a major centre for commerce and manufacturing.  There was money to be made but also increasing problems of poverty and disease.

Ernest’s grandfather had been a carpenter; his father had begun his working life as an iron founder and machinist. In 1842 Josiah Gimson and his brother, Benjamin, set up Gimson and Company making heavy machinery. A large new factory, the Vulcan Works, was built near Humberstone Road between 1876 and ’79. Josiah Gimson was quickly established as an important and influential manufacturer in Leicester. His engineering firm was one of the largest employers in the city and prided itself on being a model employer in terms of wages and conditions of work. In 1877 he was elected as a Liberal councillor in the ward of West St Mary’s.

Josiah Gimson died in 1883 when Gimson was 18. The business was left to Ernest’s two half-brothers, Josiah Mentor and Arthur, his elder brother Sydney and his cousin Josiah.

Between 1889 and ‘91 the firm of Gimson and Company cast the great beam engines which pumped sewage as part of a new system of municipal sanitation to combat the recurrent outbreaks of diarrhoea. These can still be seen (sometimes working) at the Abbey Pumping Station, part of Leicester Museums.

At about the same time the firm also cast two bridges, at Upperton Road and Mill Lane, over the Grand Union Canal. 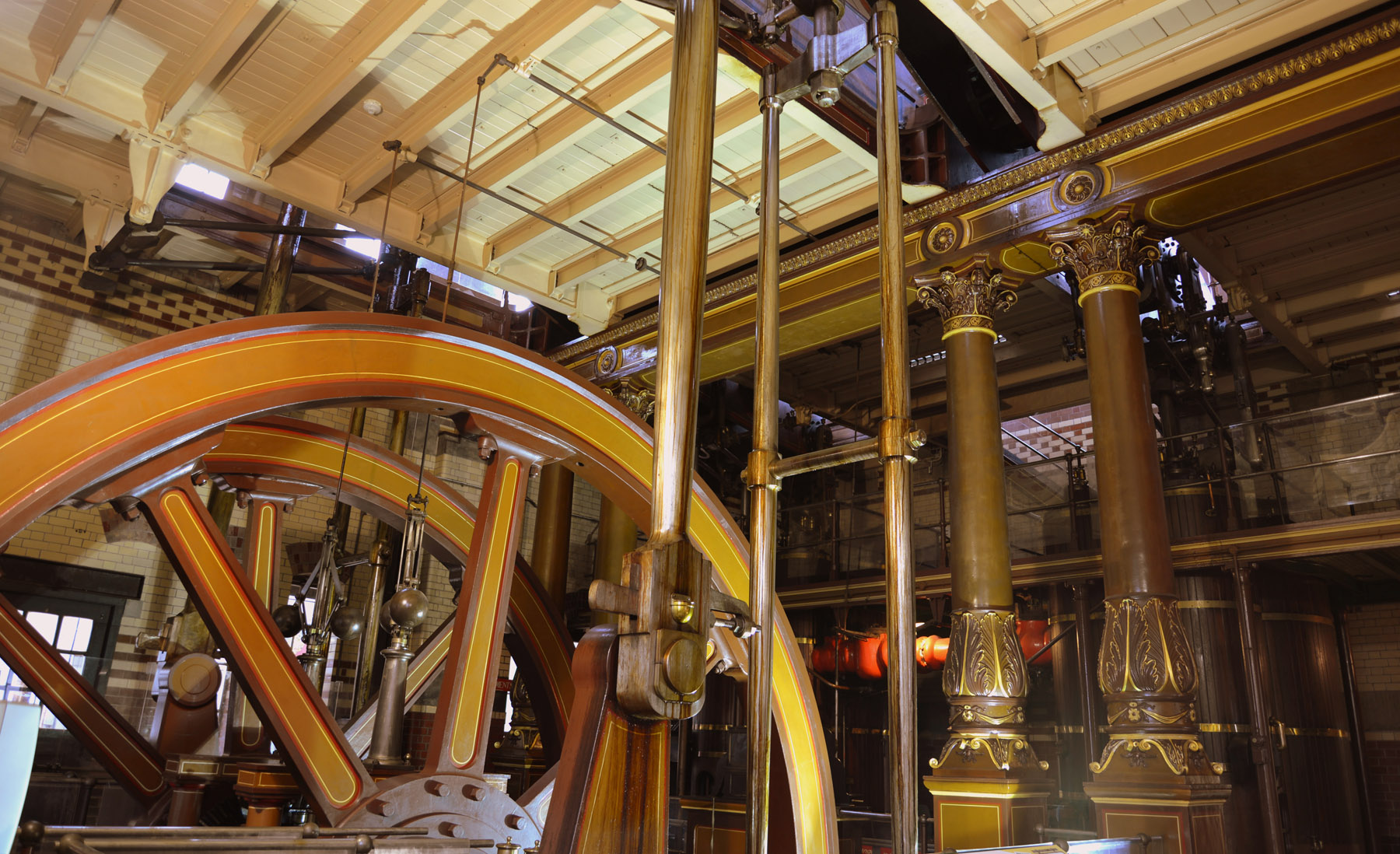 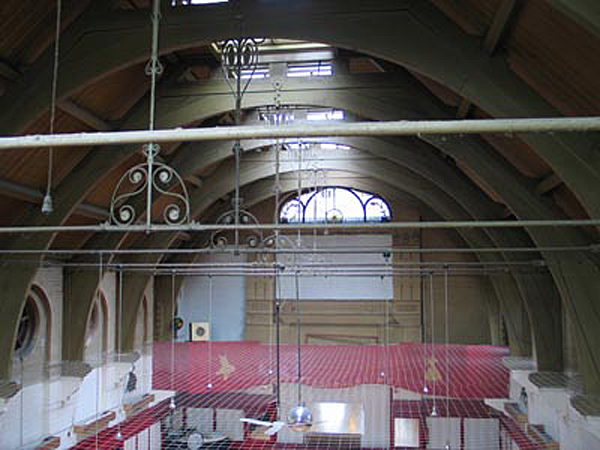 The Main Hall at the Secular Hall

The Gimson Family and the Leicester Secular Society

Secularism in England grew out the 17th-century tradition of free thought. In the 18th century Thomas Paine had argued that the Church was inextricably linked with the state to the detriment of the people. He and Robert Owen brought together the strands of political, social and religious radicalism out of which the Secular Movement developed. The term Secularism was first used in about 1851.

It was the forerunner of the Humanist movement and had many links to socialism. Leicester is the only city in Britain which still has a building entirely devoted to secularism.

A number of Secular halls were opened in midland and northern cities in the second half of the 19th century because it was becoming increasingly difficult to book rooms for their meetings. Most rooms were attached to churches and clerical authorities also put pressure on pub landlords to refuse bookings by threatening the renewal of licences.

Leicester had a reputation for political and religious radicalism in the 19th century, partly because of the city’s overwhelming reliance on just two industries – the hosiery and stocking trades – and the prevalent economic conditions. 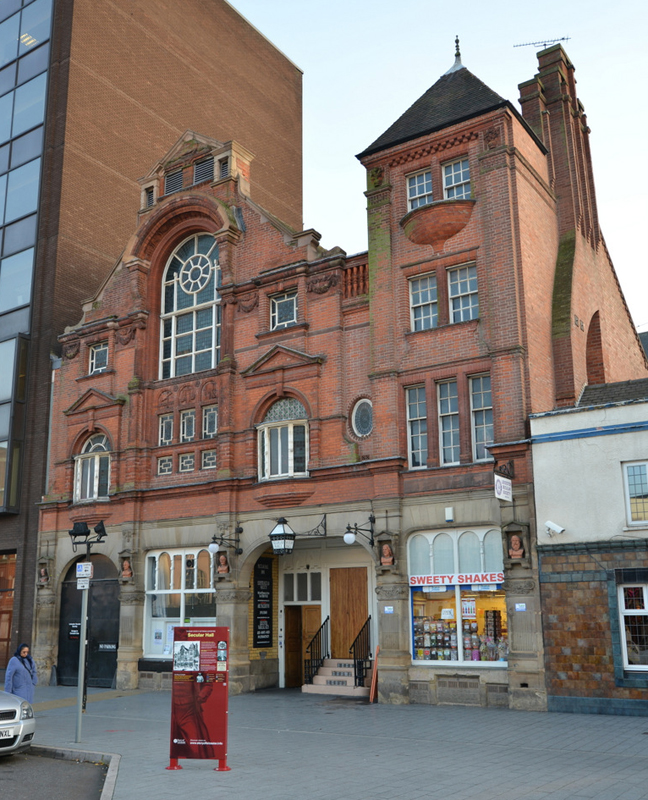 There were Secular meetings in Leicester periodically from 1853 and the Society was formally established in 1861. Josiah Gimson was one of the principal advocates of Secularism in the city. He had been brought up as a Baptist but became disillusioned with its lack of free thought. With his brother Benjamin he began attending meetings of the Secular Society in Leicester in the 1850s. When George Jacob Holyoake, founder of the Secular movement, was prevented from giving a lecture at the Three Crowns in 1873, Josiah Gimson suggested that the Secularists should build a hall of their own. A plot of land was purchased and an architect, Larner Sugden from Derby, was appointed. Five terra-cotta busts – of Socrates, Voltaire, Thomas Paine, Robert Owen and Jesus – dominate the Secular Hall. The building at 75 Humberstone Gate was opened on 6 March 1881. Gimson would then have been nearly 17 years old and attended the hall to hear the many distinguished speakers.

When Josiah Gimson died in 1883 he left the Society £100 annually for ten years.

The family remained closely involved with the Secular Movement. In August 1884 Ernest Gimson wrote to his elder brother saying:

‘You are placed on two Sub Committees of the Secular Society and I ditto. The Conference was very firey. One speaker ventured to describe the clergy of today as ‘a horde of bandits’ and another as ‘lowering mankind below the brutes’. Nothing could better please our audience, to them it was about the most enjoyable evening they had had for some time.’

Sydney Gimson in particular took a leading role in the Leicester Secular Society for 50 years. 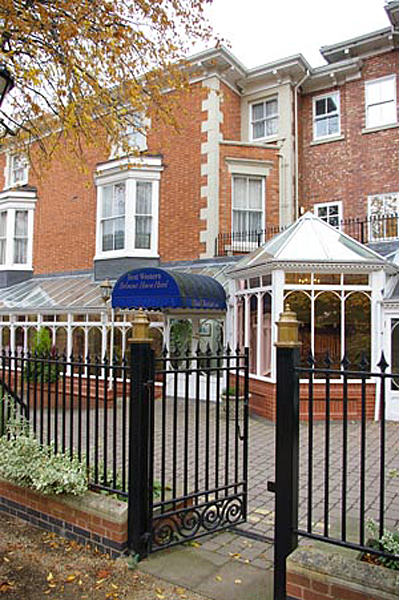 Growing up in Leicester

Ernest Gimson was one of eleven children born to Josiah Gimson, six of whom survived to maturity. The family lived 4 Belmont Villas, now 118 New Walk, and he was sent to Franklin’s School in Stoneygate. He was not considered strong as a child and was sent for holidays to the Morleys, cousins who ran a farm of Lincolnshire, to benefit from outdoor life and fresh air. Despite growing up in an urban environment, or perhaps because of it, the countryside around Leicester played an important part in the family’s recreational activities.

As a boy he loved being outdoors, playing in the countryside around Leicester. He would go to Belgrave and Bradgate Parks and the Charnwood Forest and fill notebooks with details of the plants and wildlife. According to his sister Maggie he spent his pocket money in Leicester market, buying owls and jackdaws sold as pets and setting them free. A youthful notebook included several drafts of an angry letter to the Leicester Post in 1882 in response to an earlier request in its pages for specimens of birds and animals for New Walk Museum. Gimson accepted the need for examples for scientific study and general interest but protested against the collection of duplicate specimens.

Read Ernest Gimson's Letter to the Leicester Post, written when he was 18 years old. (PDF) 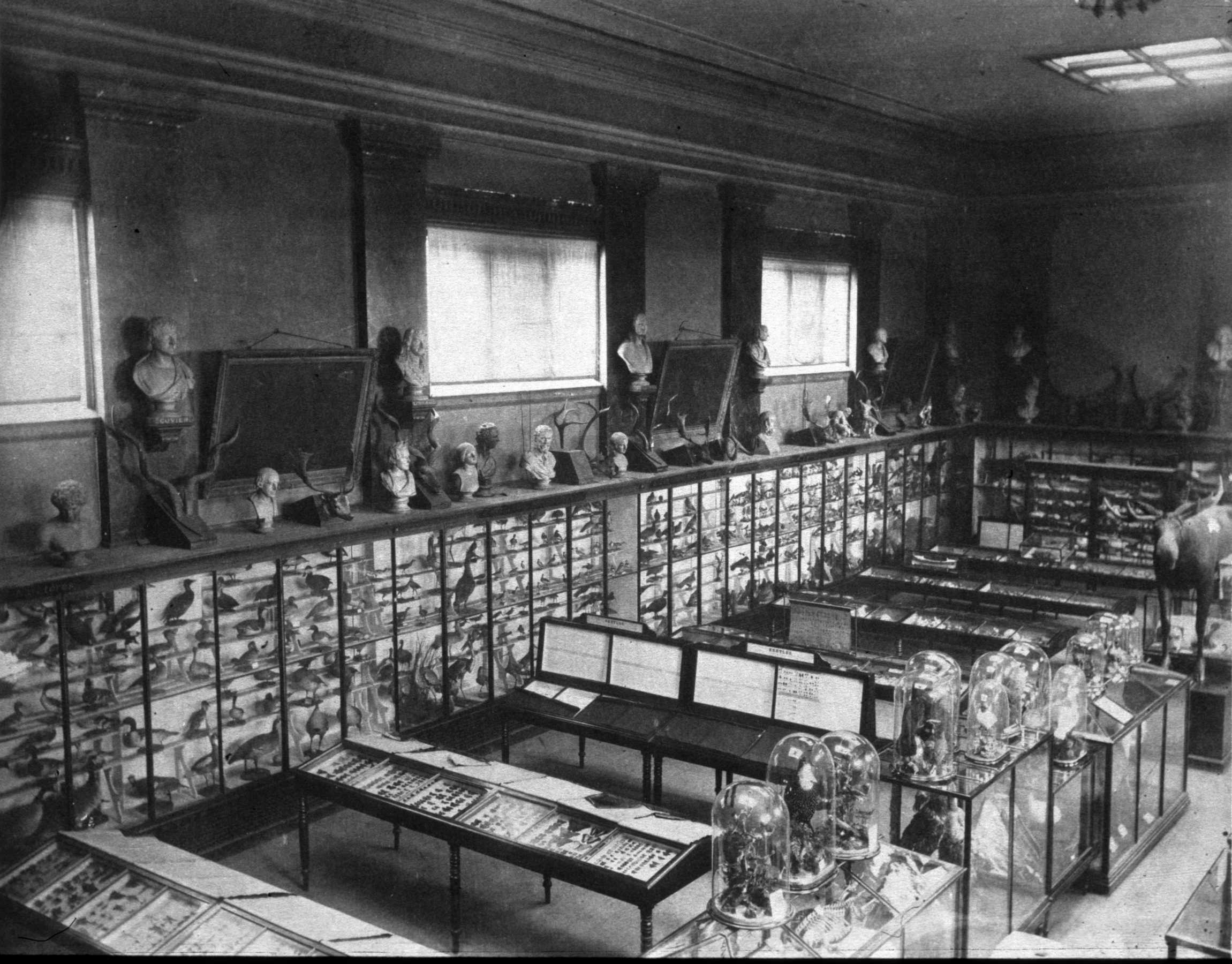 His circle of friends while he was growing up in Leicester included the London-born Clara Collet whose first teaching post was at Wyggeston’s Girls’ School, Leicester from 1878. She met the Gimson family in about 1882 and was introduced by them to the Secular Society. They also met at dances and other social events including amateur dramatics. Gimson was a particular fan of Gilbert and Sullivan’s light operas and productions were regularly staged at the Royal Opera House in Leicester. Clara Collet left Leicester and returned to London to study for an MA in political economy in 1885, the year before Gimson moved to London. Their friendship continued sporadically in London and in the Cotswolds. 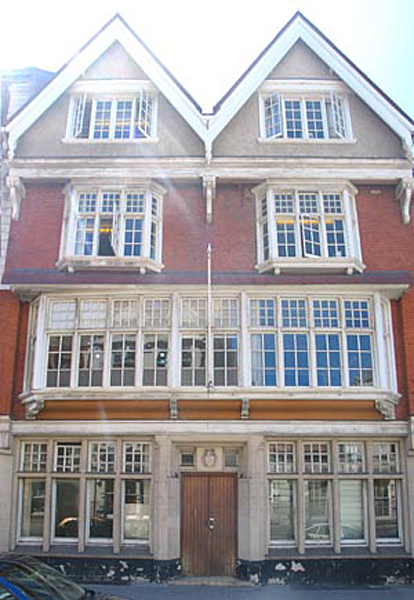 The office of Isaac Barradale on Greyfriars

In 1881 Gimson was articled to Isaac Barradale, a local architect who was responsible for both domestic and commercial buildings in the city including his own office building in Greyfriars completed in 1879. Gimson would have worked in this brick building with its first-floor sash windows running along the entire length.

Barradale was also designing villas in the pleasant south suburbs of the city including one in Knighton Park Road in 1882 for Joseph Harrison, head of the School of Art. Here the dramatic lines of its steeply-pitched roof are broken up by the introduction of dormer windows. The house also includes incised plasterwork on the coving between the walls and the roof. He left Barradale’s office at some point between the end of 1883 and early in 1884.

Gimson also attended classes at Leicester School of Art, taking courses in advanced Building Construction and entering designs for a number of competitions. In 1884 he was awarded a silver medal for a design for a Suburban House and, in the following year, won a third grade prize for a set of designs for furniture.

The Leicester School of Art was built next to New Walk Museum and became part of the museum in the 1890s. 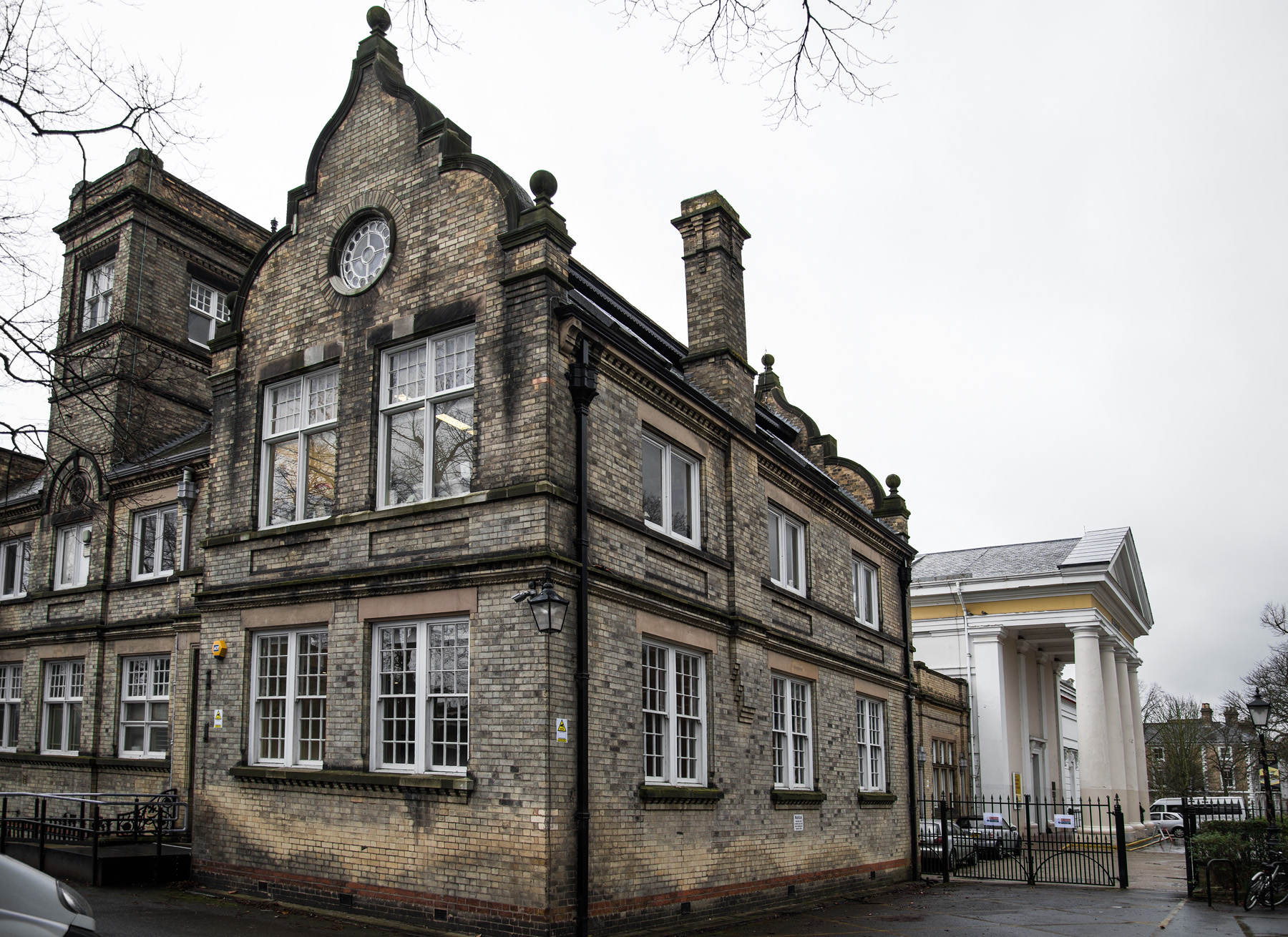 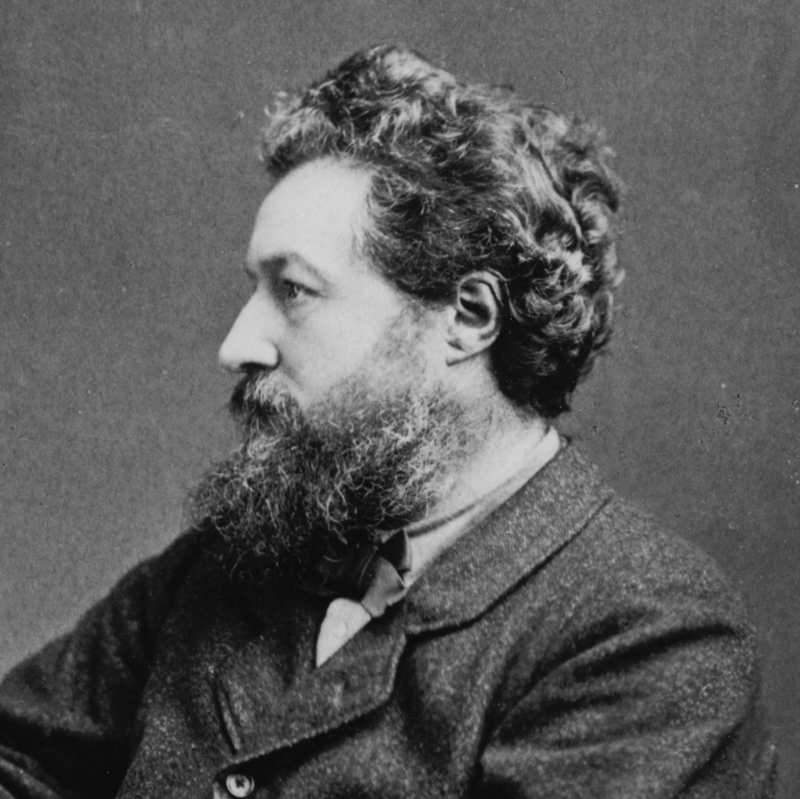 In January 1884 William Morris was invited by the Leicester Secular Society to give a talk on ‘Art and Socialism’. This was an important event for the society which publicized the event with 1,000 window stickers and 1,000 hand bills. Morris was a controversial figure, best known to his contemporaries for his poetry and writings, who had caused a national sensation by his commitment to socialism in 1883.

Ernest Gimson nervously accompanied his brother, Sydney, then secretary of the society, to meet Morris off the London train. They were immediately put at ease by their visitor who greeted them as friends and equals. According to Sydney Gimson, Morris was an indifferent lecturer whose reading of his well-prepared script lacked vigour. However that evening at the Gimsons’ home the conversation flowed. They stayed up until 2am and Morris took a real interest in Ernest Gimson’s future career. He subsequently provided him with three letters of introduction to architects in London.

By March 1886 Gimson had moved to London, working in the architectural office of John Dando Sedding and living in lodgings in Kentish Town.

Read an excerpt of the lecture 'Art & Socialism' given by William Morris at Leicester Secular Hall. (PDF)

Gimson and the Arts & Crafts Movement