Following the collapse of Kenton & Company Gimson and Sidney Barnsley considered various options. They were sharing rooms in Raymond Buildings in London and both had architectural projects in hand.

Sidney Barnsley had been commissioned to build a church at Lower Kingswood, Surrey. He lived for a while on site – apparently in a tent in the churchyard – and personally supervised all the work. Gimson was working on decorative plasterwork for a house, Avon Tyrrell, near Christchurch, Hampshire, designed by Lethaby. He had also bought a plot of land on Ratcliffe Road in the southern suburbs of Leicester and was building a house called Inglewood. Both men exhibited photographs of their architectural work at the 1893 Arts and Crafts Exhibition in London. However they decided not to pursue a traditional architectural career or even to set up as architectural designers in London as many of their Arts and Crafts contemporaries were doing.

Instead they tried a completely different way of life and approach to their work. They chose to live in the country, to get to know an area and its building traditions. They wanted to use local materials and to work with country craftsmen. They also had a romantic image about living in a rural setting, keeping hens and goats, baking their own bread and making cider. They persuaded Ernest Barnsley to give up his newly-established architectural career in Birmingham, and move his wife and two daughters from the new house he had built for them at Barnt Green, on the outskirts of Birmingham, for an uncertain future in the countryside. They may have chosen the Cotswolds at the suggestion of Philip Webb who had worked in the area. It was certainly well placed for Leicester, Birmingham and London and in addition it was attractive but neglected with cheap accommodation available for rent. In April 1893 Gimson and the Barnsleys moved to temporary lodgings in Ewen, a hamlet near the market town of Cirencester. They went off on long solitary walks looking for the perfect spot to set up their craft community. It was Sidney Barnsley who came upon Pinbury Park, a rundown farmhouse and outbuildings near the village of Sapperton.

Pinbury Park is a large house part of which dates back at least to the eleventh century. 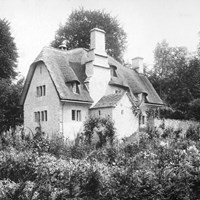 By 1900 the craft community was expanding. Gimson married Emily Thompson and Edward, the second of Sidney and Lucy Barnsley’s children, was born that year. 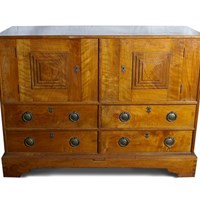 The furniture of Gimson and the Barnsleys is often described as the Cotswold tradition or style and has inspired designers and makers worldwide.